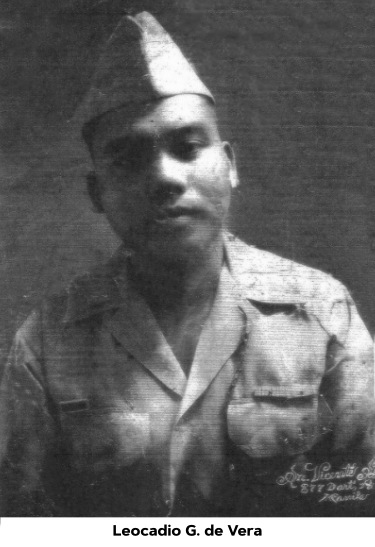 During a visit with my good friend, Butch de Vera, a Filipino and long-time Charlotte resident, Butch proudly told me of a trip he made to Washington DC last fall. He was there to attend a November 14 ceremony that posthumously honored his father, Leocadio G. de Vera, who enlisted with the United States Forces in the Far East (USAFFE) in 1941 and fought the Japanese in the Philippines during World War II.

Being an avid, albeit amateur, student of Philippine history, I was fascinated by the tale that emerged. It’s a story of a Filipino veteran being awarded a posthumous U.S. Congressional Gold Medal — eight decades after he enlisted with the USAFFE, fought valiantly with American forces, and survived the Bataan Death March — only to be denied the recognition and benefits due him for his service. His story is not the only one.

Leocadio G. de Vera was born on December 9, 1916 in Bayambang, a municipality in the northern, coastal province of Pangasinan. He enlisted in the USAFFE at the age of 25, serving in the 26th Cavalry Regiment, Philippine Scouts. His mettle in battle was tested early. On December 8, 1941, a mere ten hours after the December 7 attack on Pearl Harbor, the Japanese invaded the Philippines. They landed in Lingayen, a town on the China Sea just 25 miles (40 km) north of his birthplace and home. The major battles against the invaders took place in the towns and hills in the nearby provinces he knew well.

Colonized by Spain in 1565 and ceded to the United States in 1898 after its victory in the Spanish American War, the Philippines and its army was in 1941 an American-governed nation. It was a commonwealth, working towards independence with a 1935 agreement to self-governance, but not yet independent. (The Philippines would become an independent nation in 1946, after the conclusion of the war.) It was also strategically located within the Pacific Theater of the war. As such, a Japanese invasion of the Philippines was inevitable. In part, the Japanese wanted to prevent American forces, led by U.S. General Douglas MacArthur, commander of USAFFE, from using the Philippines as an advance base of operations. They also needed the Philippines to use as their own staging area, protect their communications network, and limit Allied intervention when they launched offensive campaigns elswehere in the region. 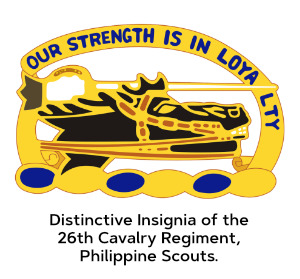 The Philippines Campaign (also known as the Battle of the Philippines) ended with the official surrender to the Japanese on May 8, 1942, making the defense of the Philippines the longest resistance to the Japanese Imperial Army in the initial stages of World War II. General MacArthur escaped to Australia, famously proclaiming, “I shall return” to liberate the Philippines — a promise he fulfilled on October 20, 1944. The defeat, though, was the beginning of harsh treatment for the Allied survivors, including Leocadio, who was soon to face the horrors of the Bataan Death March.

The Bataan Death March was a roughly 65-mile (105 km) forcible transfer of 60,000–80,000 American and Filipino prisoners of war from the Bataan jungles to Camp O’Donnell at Capas,Tarlac, which during the Japanese occupation was a prison camp. The march was characterized by severe physical abuse and wanton killings. While the actual number of casualties is unknown, experts estimate that between 500 to 650 American and anywhere from 5,000 to 18,000 Filipinos died during the march. Those who survived faced overcrowded conditions and poor hygiene at the camp, and dysentery and other diseases ran rampant.

Some Philippine prisoners were released from the prison camp early, and Leocadio was among them. He became a trader and married Teodora, whom he met during his business travels. He and Teodora raised six children, including, of course, my friend Butch. Leocadio died on July 10, 1966, at the age of 49. Butch said that at the funeral, his father’s casket was draped with an American flag.

Leocadio G. de Vera was born on December 9, 1916 in Bayambang, a municipality in the northern, coastal province of Pangasinan.

The Bataan Death March was a roughly 65-mile forcible transfer of 60,000–80,000 American and Filipino prisoners of war from the Bataan peninsula to the prison camp at Camp O’Donnell.

Prisoners started out from Mariveles on April 10, and Bagac on April 11, 1942, converging in Pilar, Bataan, and heading north to the San Fernando railhead.

Upon arrival at the San Fernando railhead, prisoners were stuffed into box cars for the one-hour trip to Capas, in 110 °F (43 °C) heat. Groups as large as 115 men were forced into boxcars designed to hold only 30–40 men. Some died of heat exhaustion and suffocation in the cars. The survivors walked the remaining 9 miles to the prison camp.

The American and Filipino soldiers held off the Japanese army long enough to allow General MacArthur  to escape to Australia, famously proclaiming, “I shall return” to liberate the Philippines — a promise he fulfilled on October 20, 1944. In this iconic photo by Gaetano Faillace, he is shown walking ashore in the municipality of Palo, located in the province of Leyte with Sergio Osmeña (Philippine President in exile), Lieutenant General Richard Sutherland, Brigadier General Carlos P. Romulo, and others. 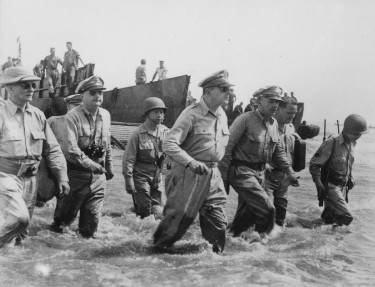 Soldiers who fought in the Philippines, including the roughly 200,000 Philippine Scouts, were federalized by President Franklin D. Roosevelt. As such, they were promised, and entitled to, full benefits for their military service to the U.S. After the war ended, though, the Philippine veterans were deprived of these benefits due them. In March 1946, the U.S. Congress passed, and President Harry Truman signed the “Rescission Act of 1946,” which reclassified the service of Filipinos who fought in USAFFE as “inactive service” — effectively excluding them from all GI Bill benefits. At the time, the primary argument in favor of the Act was that veteran benefit costs were projected to be $3 billion ($45 billion, adjusted for inflation). Of the 66 countries allied with the United States during the war, only Filipinos were denied military benefits.

Many groups organized for change, and in the ensuing years, limited benefits have been offered. Filipinos in the U.S. and in the Philippines, and organizations such as the Filipino Veterans Recognition, Education Project (FILVet REP), led by chairman Antonio M. Taguba, U.S. Army Major General, Retired, continue to actively lobby for a full restoration of benefits.

Some progress has been made.

In 2009, President Barack Obama signed a bill that gave the surviving veterans a one-time $15,000 payment for U.S. citizens ($9,000 for Philippine citizens), though acceptance of the payment would deny the payee any future benefits. The “Filipino Veterans of World War II Congressional Gold Medal Act of 2015” ensured that Philippine veterans were finally eligible for medals — at least by Congress. Along with the Presidential Medal of Freedom, the Congressional Gold Medal is the highest civilian award in the United States. More than 2,000 medals have been awarded since October 2017. 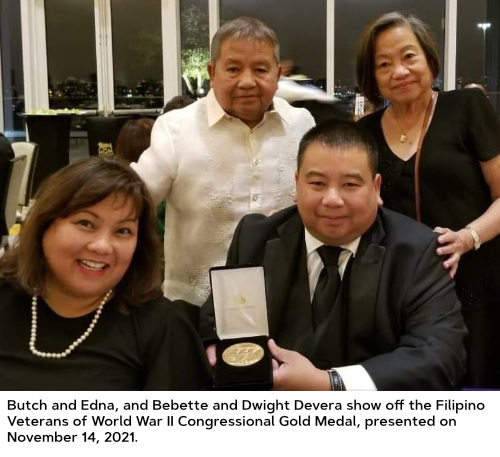 On November 14, 2021, 19 Congressional Gold Medals were awarded, including one to Leocadio G. de Vera. He previously earned several decorations for his bravery — Asiatic Pacific Bronze Star, Philippine Defense Ribbon with 1 Bronze Star, Philippine Liberation Medal with 1 Bronze Star and a Distinguished Medal with 2 Oak Leaf Clusters. These are recorded and no doubt helped with his much-belated, posthumous recognition last fall.

Had the recognition of benefits been granted to Leocadio after the war, what might they have meant for him and for his family’s circumstances? What new opportunities would they have opened up for this man — not to mention all the other Filipinos — who so bravely fought for the defense of the Philippines as an enlisted soldier of the U.S. armed forces? We will never know, but the bravery and love of country of this paterfamilias, Leocadio G. de Vera, now flows in the veins of his children, who have distinguished themselves in civic leadership in their hometown, the birthplace of a hero who was, far too late, but at long last, recognized by the U.S. for his service.

The Last Cavalry Charge
On Bataan, the 26th Cavalry, Philippine Scouts conducted much needed offensive actions on horseback, including the last cavalry charge in U.S. Army history. Leocadio shared some his experiences during the war and told about story of the fate of the horses of the 26th Cavalry, which is now published in a book: The Doomed Horse Soldiers of Bataan, by Raymond G, Woolfe, Jr. 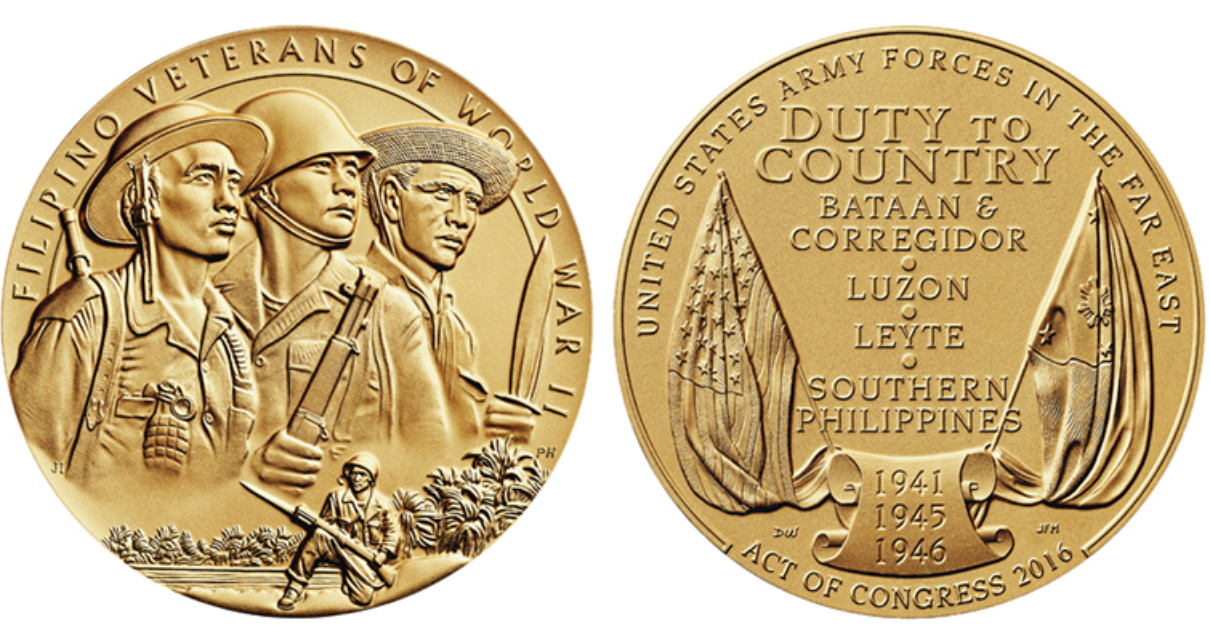 ABOUT THE AUTHOR
A Filipino who arrived in the U.S. in 1976, Alex C. Romero has been a resident of Charlotte, NC since 1989 and is an active member of FACC - Filipino American Community of the Carolinas and the current president of FAS, Inc - Filipino American Spirit Foundation. He is also a member of the Board of PCAFPD, Peace Corps Alumni for Philippine Development. Alex is retired from the agriculture industry and exhibits photographs at Mint Hill Art Gallery.