The immigrant experience leaves a different imprint on each generation.

First generation Asian American immigrants and their children, who are born in the U.S. and grow up immersed in American culture, face not just a generational gap, but a cultural one as well. 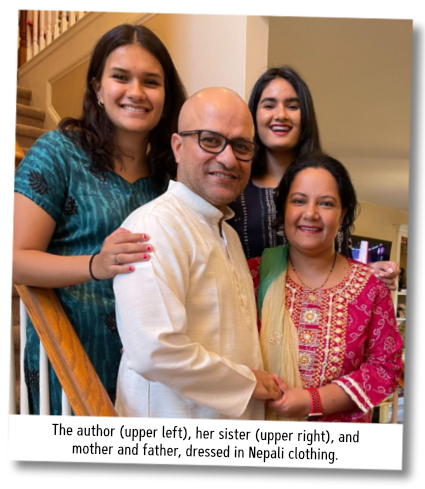 The path to marriage in the U.S. is pretty straightforward. Meet someone. Date. Fall in love. Become engaged. Get married. It’s usually not that simple, of course (just watch any RomCom), but these established cultural norms allow people to get to know each other before making what is intended to be a lifetime commitment.

That’s not how it works everywhere. Take my grandparents, for instance. They just celebrated their 60th anniversary, which naturally brings up stories about their marriage. At the age of 15, my grandmother, Uma, was married to a man four years her senior. She had no idea what my grandfather, Hari, looked like until after they were married. The whole wedding was arranged by relatives, and she didn’t get a chance to see, much less talk to, the man who would be her future husband.

Their family home was in Dharan, a small city in Nepal. My grandfather, to his credit, was a great husband who worked tirelessly to support his family. His first job as a married man paid 4 rupees a day, which is equivalent to about 4 cents. Though a small amount, it was enough to support a family back then. Perhaps it helped that they had no electric bills…because their home had no electricity. To produce light, one had to keep a small candle filled with kerosene oil. Fast forward 60 years, and they are celebrating their anniversary with family in a middle-class house in the suburbs of Charlotte, North Carolina. 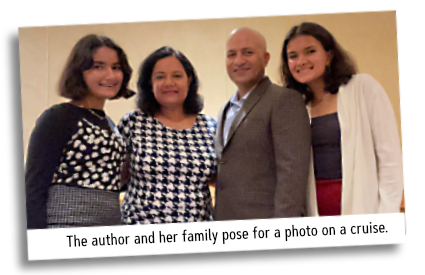 My mother, Pratigya, and my father, Roshan, were introduced through members of their families in Nepal and were also arranged to be married. In their case, though, my parents got to know one another  — and certainly got to see what the other person looked like — before they were married. On the other hand, my aunt, Prakriti, also born and raised in Nepal, met a man from India while attending college in the U.S. They dated, fell in love, and got married.

But while an immigrant leave the physical homeland of their culture, they never leave that culture behind. For Asian American immigrants, whose children are born in the U.S. and grow up immersed in American culture, this creates not just a generational gap, but a cultural one as well. 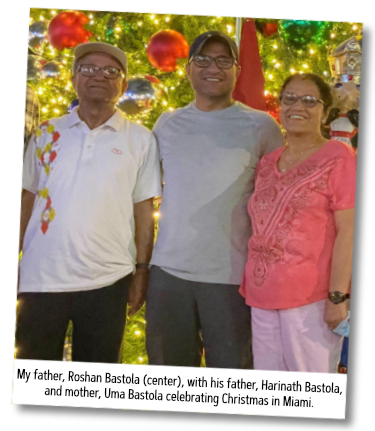 Aunt Prakriti says that the greatest challenge for immigrants and their children is “balancing two cultures and lifestyles.” She notes, “You don’t want to distance yourself from your roots, and you want to pass along and teach your kids about your culture. So that’s double the work.”

Expressing a similar sentiment about the challenges of raising children in a “dual-culture” household, my mother says, “Nepali culture is what I grew up with. In the U.S., where I am raising my children, I follow certain practices from my culture, because I believe in it. But I cannot expect the same from my children, because they have not experienced it the same way.”

And that’s the challenge. I did not grow up in Nepal, so I haven’t experienced the same things my parents did. They have done an amazing job teaching me Nepali traditions, but it’s different when you don’t experience them firsthand. That’s one reason why it’s so difficult for immigrants to preserve the culture they were born into. Their children were born into a different one. 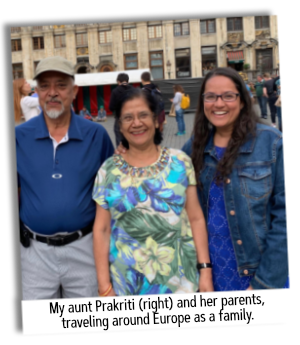 Adding to the challenge is that for many immigrants, my parents included, the U.S. is very much a second home. For my father, America is truly the land of opportunity. “The U.S. has a value that everyone should be treated equally and based on what human beings accomplish,” he says. “They should be rewarded for it. Family is what the U.S. is all about.” He was able to get a better education and a better life here in the U.S., something that would have been difficult back home. He had $3,500 to his name when he arrived, and he is now able to support not only himself, but an entire family, including his parents.

Traveling with $200 when she immigrated here, my aunt feels the same way. She says, “You can make a career out of anything that interests you. You don't have to be an engineer or a doctor to sustain a decent lifestyle. You find opportunities if you look for them. That is not the case back home (especially not when we were growing up).”

Immigrants live with their hearts in two places. For someone like me, who grew up in the U.S., it’s difficult to understand just how hard immigrants like my parents had to toil and what they sacrificed by coming to the U.S. But they did it, and they were able to put their family in a better position than they would have had otherwise. On the other end of the cultural gap, my grandparents understand why my parents would want a better life, but they don’t have the same immigrant experience. It can be difficult for them to understand why my parents adjusted and gave their children the freedom to adjust to American life so willingly. 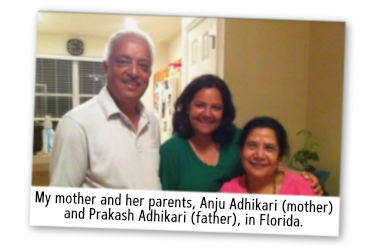 And so the impact of immigrating continues to create challenges for families, even after building a successful life here. Each generation has a different cultural experience, and thus a different perspective on the relative importance of preserving the old or embracing the new. Bridging that cultural gap between an immigrant and their parents, or an immigrant and their children — or even between an immigrant’s children and their grandparents — is an ongoing process. And while it can be a challenge, it also provides an opportunity for families to grow closer together. The key is to maintain a strong family bond, keep an open mind, and have respect for everyone’s perspective. Sometimes that’s easier said than done, but while each generation of my family has lived through a different cultural experience, what matters above all else is that we are a family. And that bond is strong enough to bridge any gap — generational or cultural.

Kunjal Bastola is finishing her senior year at Ardrey Kell High School and plans to attend Northwestern University in Evanston, Illinois, in the fall. She grew up in Chicago and has one sister, who is currently in middle school. She loves spending time with her family and learning about Nepali culture and heritage. Kunjal aspires to be a journalist in order to combine her two passions: writing and serving others.

Advice from my favorite immigrants 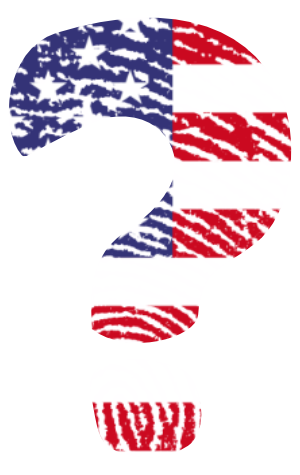 To the immigrant: “How you tie both cultures together is on your hand. It is difficult, but worth trying. Giving up is not the solution.”

To the immigrant’s children: “You need to respect and understand where your ancestors came from. Learning something different should be enjoyable, not forceful. In the U.S., everyone is an immigrant. Everyone has stories, and you are in a better place to create your own story and belong here. Do not hesitate to learn, show, teach your and/or your parents roots.”

To the immigrant’s parents: “Never forget why your children immigrated: to seek better opportunities and improve quality of life for generations to come. Join together to cultivate a new generation. In order to achieve something, there may need to be some sacrifices. Example: not everyone can be together at one place, but when they are, enjoy the moment and cherish what you have.”

“Do not forget your background and remember your culture, because it certainly will help you achieve your goal here in the U.S.”

To the immigrant: “There are many challenges immigrants face, and I feel like we all have a common theme: balancing multiple cultures and lifestyles in various forms. Keep teaching our kids about our culture. Even if they grasp a little bit of it, it's a win.

To the immigrant’s children: “Don't discount the knowledge that your parents are trying to give you. You may not feel it necessary now, but it will help you see a world in a very different way later in life.

To the immigrant’s parents: “Your kids and grandkids have a tough life fitting in with the pressure of balancing two cultures. Keep passing the knowledge.”