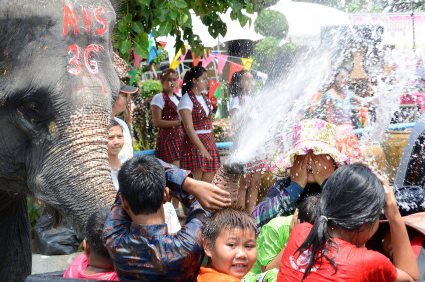 Water is a powerful symbol of life — and also of motion, renewal, and purity. Its cleansing properties play an integral role in the mid-April Mesha Sankranti (Solar New Year) celebrations that take place on the Indian subcontinent, and especially throughout Southeast Asia. A saṅkrānti (Sanskrit) is the transmigration of the sun from one zodiac to another in the Hindu luni-solar calendar. Mesha Sankranti coincides with the rising of Aries, the first sign on the astrological chart. When the sun enters Aries, it marks the beginning of a new cycle and a new year. In modern times, that typically occurs around April 13 or 14.

The solar cycle year is celebrated in traditional Hindu cultures, and where there are large populations of Hindus: India, Nepal, Bangladesh, and Sri Lanka, as well as Malaysia, Mauritius, and Singapore. Having common cultural origins with Hinduiism, Solar New Year is also celebrated where Buddhism is prevalent. In Thailand, Laos, Cambodia, Myanmar (Burma), parts of Northeast India, and areas in Vietnam and Yunnan, China, the festivals are collectively known as Songkran.

Solar New Year takes place during what is typically the hottest month in Southeast Asia. Mid-April also marks the end of the spring harvest and the beginning of the rainy season. So water is a natural element to feature in the various festivals. Thailand’s urban street water fights are the best known public celebrations, attracting tourists from around the world. But there is much more to commemorating the new year than spraying everyone with Super Soakers (although that’s no doubt quite fun). Songkran is first and foremost a religious observance, which can sometime get lost on Westerners focused on soaking in the revelry.

The solar new year festivals in Southeast Asia have their own individualities, but, rooted in Buddhism, they share many cultural traits and symbolic traditions with each other (and to a lesser degree, the Hindu celebrations on the Indian subcontinent.)

As the above chart indicates, official holidays typically last three or four days, though celebrations in some places can extend for weeks. The first day of the festival is typically observed as the last day of the old year. The second day is the “day of no year,” and the third day marks the start of the new year. Though traditions differ, the new year festivals are a time for families to be reunited, honor to be accorded, work to be ignored, and feasts to be consumed. And, of course, to wash away the bad of the old year and start the new year with a clean slate and fresh blessings. 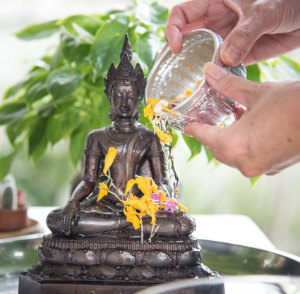 Merit is a fundamental concept in Buddhist ethics. It is a beneficial and protective force which accumulates as a result of good deeds, acts, or thoughts. Not surprisingly, merit-making is an essential component of the new year celebration.

While regular work is typically shunned, people prepare for the new year by cleaning houses, schools, offices, and other public spaces. They’re joined by family members who have moved away but return to spend time with loved ones.

Families wake up early and visit Buddhist temples, where they bring food and listen to monks as they preach. Visitors sprinkle scented water over Buddha statues to represent purification and good fortune. Younger people also pour water on the hands of the elderly to show their respect and ask for blessings in the coming year. 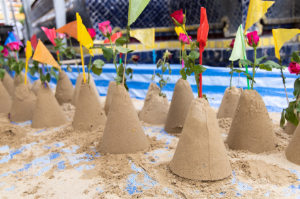 Merit-making also includes bringing sand to the temples, which is used to replenish the sand that’s been carried away on shoes throughout the year. They build stupas (mounds) on the ground, which are then decorated with colorful flags and flowers.

In Cambodia, during Khmer New Year (Sangkranta), people erect a sand hillock on temple grounds. They mound up a big pointed hill of sand or dome in the center which represents Valuka Chaitya, the stupa at Tavatimsa where the Buddha's hair and diadem are buried. The big stupa is surrounded by four small ones, which represent the stupas of the Buddha's favorite disciples. 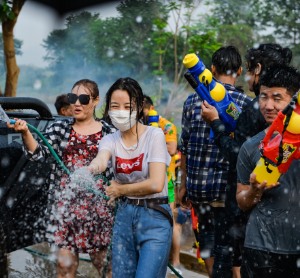 Celebrations include parades, beauty pageants, games, food vendors, flag ceremonies, dances, boat races, and much more. And then, of course, there are the street water fights, in whicih the celebration becomes a raucous, public street party. Young people will gather on the streets armed with buckets, water balloons, water-guns and hoses, in order to splash water on each other and all passersby to both give and receive blessings.

Thingyan, the Burmese New Year Festival, is the oldest water festival, celebrated since the Tagaung period (1–10 AD) of Myanmar. It is celebrated over a period of four to five days, culminating in the New Year. Water-throwing or dousing one another from a vessel is the distinguishing feature of this festival. Traditionally, Thingyan involved the sprinkling of scented water in a silver bowl using sprigs of thabyay (also known as Jambul, or black plum), a practice that is still prevalent in rural areas. As with other solar new year celebrations, the sprinkling of water is intended to "wash away" one's sins of the previous year. In major cities, garden hoses, huge syringes made of bamboo, brass or plastic, water pistols and other devices are also used.

On the Indian subcontinent and throughout Asia where Hinduisim is commonly practiced, the solar new year of course has the same significance as it does for the Buddhist communities in Southeast Asia. 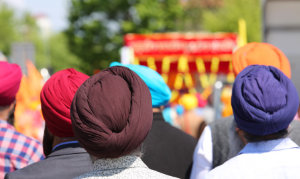 The Sangken festival is celebrated in Arunachal Pradesh and parts of Assam, India, as the traditional New Year's Day from 14 to 16 April by the Theravada Buddhist Communities. Since traditions and cultures vary throughout India, not all states celebrate the new year at the same time. For many Hindus, though, the first day of Vaisakhi (also pronounced Baisakhi) — which usually occurs on April 13th, though sometimes on the 14th — marks the traditional solar new year. For example, Vaisakhi is Punjabi new year, which also celebrates the spring harvest, primarily in Northern India. Vaisakhi is also celbrated  in Assam, Bengal, Bihar, Himachal Pradesh, Haryana, Kerala, Odisha, Punjab, Tamil Nadu, Uttar Pradesh, Uttrakhand and other parts of India. Vaisakhi is also a very important day for Sikhs and one of the most colourful events in the Sikh calendar.

Nepal
Nepali New Year is known as Navavarsha. The Navavarsha is one of the many Nepali festivities celebrated with parades, parties, family gatherings and, of course, massive feasts. The entire country comes to life with colorful celebrations, rejoicing, and social entertainment. Navavarsha is also a day of religious importance to many. In the morning, people will typically make their way to temple to perform puja, a ritual offering presented to their gods. Nepal’s New Year is accompanied by Bisket Jatra or the Festival of Bisket in Bhaktapur. 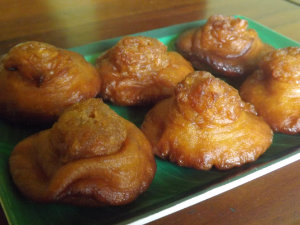 Sinhalese New Year, known as Aluth Avurudda, begins with the cleaning of the house and lighting of an oil lamp. In some communities, women congregate to play a drum to announce the change in the year. Families carry out a variety of rituals, the exact timings of which are determined by astrological calculations — from lighting a fire to making milk rice to eating the first morsels of food. The rituals vary based on the locale. though the core of the celebration is the same. Additionally, the approach of each auspicious time for the various rituals is heralded by loud firecrackers. Once the important rituals are done, the partying begins as families mingle in the streets, homes are thrown open, and children are let out to play. Plantain is dished out alongside celebratory feasts of Kavum (small oil cake) and Kokis (crisp and light sweetmeat, originally from the Netherlands. 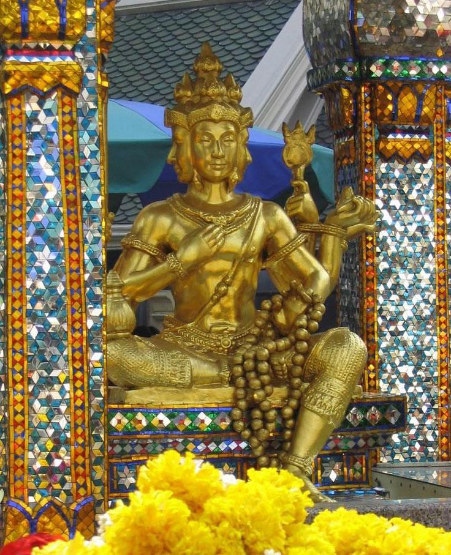 The Legend of the Four-Faced Heavenly King: The Lao Version

For Southeast Asians, the story of the origin of meṣa saṅkrānti comes from the Buddhist version of a Hindu legend concerting the creator god Brahma. As with most ancient legends, versions of the story vary from one place to another, as do the names of those in the story. Phra Phom is the Thai representation. In Laos, he is known as Kabilaphom. In Myanmar (Burma), he is called Arsi. And so on. While the tales differ, the broad outline of the story is similar to this Lao version.

Phanya Kabilaphom, the legendary Heavenly King with a four-faced head, often asked people to solve riddles. If they provided the wrong answer, he would have them beheaded. One day, he asked a young man to solve a complex riddle within seven days. Kabilophom confidently stated that he would forfeit both his own head and his Kingdom if the young man were successful.

In many tellings, the question asked was, "Where is the glory of men (sri) located in the morning, during the day, and in the evening?" The loser would have his head chopped off. The young man thought in vain for six days, but could not find a solution to the riddles. He lay beneath a sugar palm tree and overheard a conversation between a pair of eagles who planned to eat his corpse when he lost the bet. The female eagle asked her mate whether he knew the answer. He answered, "In the morning, the sri appears on the face, so people wash their faces every morning. At noon, the sri is at the chest where people spray perfume every noon. In the evening, the sri goes to the feet, so people wash their feet every evening."

On the seventh day, the young man solved the riddle. Kabilaphom subsequently ordered his seven daughters to offer his head to the man. Because Kabilaphom possessed such great powers, though, severing his four-faced head would be a catalyst for disaster. If his head fell to the ground, the earth would burn. If it were submerged in water, the oceans would boil. If thrown into the air, tornadoes would destroy the earth. To avoid such devastation, Kabilaphom instructed the young man to present his head to his daughters to keep deep inside a cave.

As a show of respect, and to perhaps ward off natural disasters, one of the daughter formed a procession with the severed head. which was paraded on a sacred silver receptacle in an annual procession. During the annual Pi Mai festival, seven young ladies (representing the seven daughters of King Phanya Kabilaphom) are selected for their knowledge of culture, beauty, and talents to be Nang Songkhan (Ladies of New Year). The daughters are made curators with golden globes, to make offerings for the festival so that people can pay homage to the King,

Giving alms to Buddhist monks during Songkran at the Buddharaleigh Temple, April 2018.

Giving alms to Buddhist monks during Songkran at the Buddharaleigh Temple, April 2018.